Seeing something does not mean that we automatically also really take it in – and react appropriately. Our eye hyper-tracking technology enables us to precisely track a person’s gaze – we can see when someone is concentrating on something and processing information and when their gaze jumps back and forth in agitation. You can learn exactly how this works by reading this blog article about human vision and perception.

Our eyes are constantly on the move: Our eyeballs make a range of movements in all directions, some of which are voluntary and others of which are entirely involuntary, and as our eyes move we perceive different objects either deliberately or by chance. If we want to see an object in sharp focus then we have to fixate on it – because eyesight is sharp in only a very small area of our visual field, the so-called central field of vision (fovea centralis) which deviates from our central axis of vision by +/- 1 degree.

Surrounding the central field of vision is the parafoveal field of vision, where visual acuity is reduced to slightly less than 30 percent, followed by the visual periphery that extends to the edge of the retina. Vision here becomes increasingly blurred due to the declining density of the sensory cells. We perceive things in this field too, but mainly changes in light and dark, and movements. However, if we want to consciously perceive something and process the optical information we have to fixate it.

The rapid eye movements to capture a new target before it is fixated are known as saccades (Latin: jerky, jolt). During these eye movements no information is absorbed by the nervous system, for this very short period of time the eye is “blind” so to speak.

This perfectly normal viewing behaviour can become problematic in situations when, for example in road traffic, an excess of visual information leads to so-called information stress. Under information stress, triggered for example by confusing road signs or too many optical stimuli such as light sources, the rate of ocular movement increases rapidly – with up to five eye movements per second. Fixations become shorter making it impossible to recognise situations accurately and to respond appropriately in the time that is available. The risk of a road accident rises.

Using our technology we can precisely measure, digitalise and evaluate what road users perceive and how they react to it. Where does their gaze go when there is oncoming traffic, when they are overtaking or driving against the light. With this information, road safety can be improved, for example, by using clearer signage. Driver viewing technique can also be trained thus improving perception and concentration.

The same is true in the area of security: Using eye-tracking analyses and targeted gaze strategies, police and military personnel can be trained to blink less frequently and make fewer eye movements. This reduces the dead-time during which the brain cannot process information from the eye. On a real-life mission, the speed of personnel responses can be increased by crucial tenths of a second.

As a general rule, when talking about vision and perception we distinguish between distributive gaze behaviour, which we use to gain an overview, and focused gaze behaviour, in which fixations enable us to recognise details. In practise we constantly switch between both types of attention, with the switching (usually through a saccade) requiring up to 0.4 seconds.

Studies have shown that children do not usually have very highly developed distributed attention. An eye-tracking analysis carried out by Viewpointsystem in cooperation with the Austrian Automobile, Motorcycle and Touring Club (ÖAMTC) showed that instead of perceiving several objects in a complete scene, children focus their attention on just one object or on details on the object – and this easily leads to mental overload and misjudgements. Only with increasing age do children learn to assess multiple sources of danger in an overview and to respond appropriately. However, parents and teachers can train danger awareness with the child and heighten its perception for risk situations. 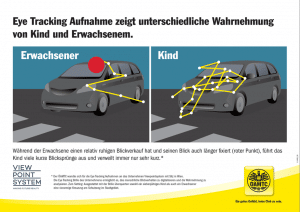